Just a quick one as the 6th edition of International Startup Festival (Startupfest) kicks off in my beloved Montreal today. Startupfest is the summer event in Montreal. It’s a conference like no other; one where entrepreneurs and investors alike show up in t-shirts, shorts, and slippers. Bonus: it’s always in a funky location in beautiful, lively Old Montreal.

Unicorns: hot topic today at #startupfest. This AM there were unicorn stuffed toys being shot from a t-shirt gun?? pic.twitter.com/OZ2UNcWViA

This post was inspired by Montreal entrepreneur LP Mauricie’s Ode to Startupfest. In it, he uses the annual Startupfest as a yardstick for his personal growth as an entrepreneur. I too continue to ask myself, “Where am I relative to where I was at last year’s festival?”.

Year 5 (2015): I championed the Data tent in partnership with SAP + Startupfest was a client and partner of Nexalogy (where I was Head of Marketing)

Some may know of my first venture into the startup world, Jolietta. I launched it in November 2012, and in the summer of 2013, I applied for a (free) demo table at Startupfest’s Open House*. I was granted one, and was so excited.

But that only gave me access to the 4th day; I wanted to be there for the whole thing. Not wanting to fork out ~$900 for a ticket, I volunteered 8 hours of my time (which ended up only being 4) in-exchange for an all-access pass. I was so enamoured with it all, and felt like a kid in a candy store. Everything was so new and shiny to me. The concept of pitching investors and journalists for a prize or money, networking with people way beyond my years/experience, constantly pitching my startup…

Us at International Startup Festival's Open House! Come by, we'll be here till 3pm today!… http://t.co/10VGUu3CAe

At the end of it all, I was so tired, so inspired, and so full of emotion.

Startupfest 2013 was also where I met the CEO of Brandicted. Brandicted, being a fashion e-commerce platform, was a perfect fit for me at the time. And let’s face it, bootstrapping a startup is hard, so I welcomed the extra income. I ended up working for Brandicted all through 2014. 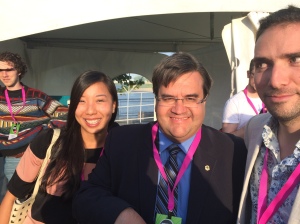 As Marketing Manager at Brandicted and while wrapping up Jolietta, I became involved with (not-for-profit) Built in MTL. Being a resource on the Montreal startup ecosystem, we championed the Montreal tent in partnership with Notman House. Here, I reconnected with the CEO of Nexalogy, and this was where he first talked to me about the marketing role that he was looking to fill. I ended up later securing said role, and was with them all through 2015. (This was also the year that I met and spoke with Dave McClure and Montreal mayor Denis Coderre at the fest)

The Montreal tent is where it's at! Come one, come all! #startupfest cc. @notman @tunestarsdotcom @EruditeScience pic.twitter.com/N8kPsXc0Ck

As Head of Marketing at Nexalogy, I championed the first ever Data tent, in partnership with SAP. In addition, Nexalogy, long-time partners of the fest, powered a real-time analytics dashboard of the event.

1/2 of our #startupfest team getting their art on 🎨 pic.twitter.com/cGmGsv05NY

#startupfest, what is your vision for a data driven world? Drop by the Data tent & tell us! Cc. @SAPStartups @mtldata pic.twitter.com/nFlXK1kg09

Marketing + startups are still my thing, except I’m no longer in Montreal, but working remotely as a digital nomad (and erm, living the dream). I’m currently in Singapore, and am off to Tokyo next week. Read more about my digital nomad adventure here.

I have, and am growing up with Startupfest. And look how they have grown, they now have so many offshoots: Angel Fest, Accelerator Fest, Fund Fest, Scaleup Fest, and Hacker Fest. Shoutout to the team who’s helping put Montreal on the map as a hot startup city. Founders Phil Telio and Alistair Croll, who are always eager and willing to help out the community. I know first-hand that they’ve generously sponsored tickets to the fest as prizes for Big Data Week’s hackathon two years in a row now. Warm, multi-talented Rebecca Croll, whose smile and positive energy are infectious. Ever on-the-ball Pamela Perrotti and (beautiful, mature and capable beyond her years) Katherine Johnsen. I am bummed to be missing Startupfest this year, but I wish you all an amazing fest, and look forward to returning as who knows, a judge/mentor/patron/speaker in the years to come. 😉

P.s. If you’re not attending Startupfest this year, you should definitely check out the (free!) Open House on July 16th at least.

*The Open House is the unofficial 4th day where they open up to the public (read: you don’t need a ticket), and I believe 2013 was the first year they had it.

What are you thinking? Cancel reply