Today is Racial Harmony Day in Singapore, though the local paper did not mention that (not surprised), the Prime Minister did on Facebook. It’s observed to commemorate the 1964 Race Riots, and to celebrate the diversity in Singapore. It’s also the one of 2 days a year where kids can show up to school in clothes other than their school uniform. Here’s a photo from when I was 15 or 16, on Racial Harmony Day. There’s:

All this to say: most of us were wearing traditional clothes belonging to another race.

This is one of the reasons why I loved growing up in Singapore. It’s a young country of immigrants (much like Canada and the US), with 4 main ethnic groups intertwined. Julia (in red), a close friend till today, has a Eurasian father and a Korean mother, yet she took Mandarin as her second language in school. My mother, adopted by Chinese parents, learnt Malay.

The church I usually attend when I’m in Singapore is under renovation, so Sunday mass is temporarily being held at a nearby Catholic school. The stage in the main hall is being used as an altar, and right behind it is a yellow banner that says “Salam Aidilfithri”, leftover from the recent Eid. It warmed my heart so much to see this; symbols of Islam and Christianity side by side, and what’s more, for it to be normal, so normal (in Singapore at least). Right below the banner hangs “Unity in Diversity”, which is what I named this post after. Racial Harmony Day is only celebrated in Singapore, but I think it should be a global event. Especially in light of all the horrible, horrible stuff that’s been happening… in the friggin’ Year of Mercy no less. 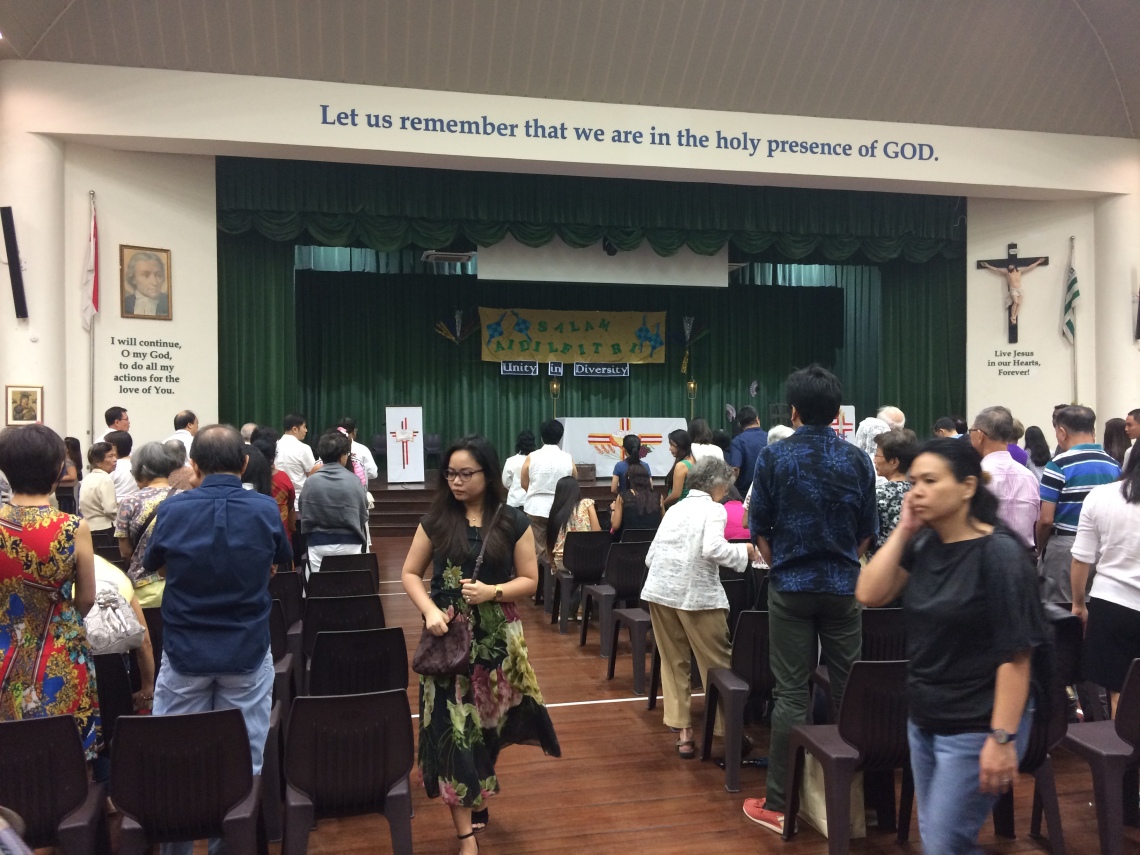 So here I am, wanting to share the great example of racial harmony that is Singapore (and Canada!), and wanting to share about my circle of friends – the people I love to death and consider family.

Here’s some of my Singaporean friends. From left to right:

I’ve spent almost half my life in Singapore, and more than half in Canada. I’ve been a majority in Singapore, and a minority in Canada. In Singapore, I grew up with all these different races – eating their food, celebrating their holidays, speaking (some) of their language. In Canada, well Montreal specifically, I met so many people from South America, Africa and the Middle East, which I hadn’t before, and learnt so much about their culture. I now have dear friends from these parts of the world, speak and understand a tiny dash of Arabic, and love and occasionally crave Caribbean curry, Lebanese tabbouleh, Iranian chelow kabab…

I cherish these international friendships so much, and wish the whole world would also be “colourblind”. Have I experienced racism? Heck yeah. If I had a dollar for every time THE FIRST THING someone said to me was “Chinese? Japanese? Korean?”, as if they can pop quiz me at will. But I don’t let it get to me. We have to unite in our diversity, and put aside our differences and beliefs. How?

What are you thinking? Cancel reply